Scroll below to view. For additional information, please visit our Facebook page.

View available dogs
Rosie
Welcome Rosie to Chelsea’s Hope Boxer Rescue. This beautiful girl is full  Eng Bulldog and will be a year in September… She is vocal, quirky and funny! She has spina bifida but that only means no accidents in the house, no additional medical costs! She would have been killed at as a puppy… Any questions feel free to contact us….She is best as a only child as she loves her humans😊Spina Bifida dogs are totally normal dogs who just need a break and people to keep an open mind. Let’s raise awareness!
Petunia
Please welcome pretty Petunia to Chelsea’s Hope Boxer Rescue!
Petunia was left tied to a tree in the San Antonio Texas heat!!!
She’s an English Bulldog and lucky to be alive!
Petunia is approximately 2 years old, a sweet heart and good with the other dogs and kids in her foster home…We are looking for a foster or foster to adopt home.
Please apply online
Or message me for more info
https://www.chelseashopeboxerrescue.com/adoption…/
Jack
Jack.  What can we say about Jack?  His story is like the millions of other dogs, over the years, who’ve ended up in a shelter or rescue.  We don’t know too much about Jack. We can’t really determine how old he is but he has lots of energy and should do well with other dogs. What we do know: Jack and a companion cat were dropped off at a local shelter in W. Va by an older, somewhat belligerent, woman who said both showed up at her house as strays.  Per her, Jack was dripping blood and pus from an ear injury.  The woman insisted the shelter take the duo but when told there was literally NO room for either, said fine, she’d just dump them.  You know, no true rescue worker would ever let that happen.  Calls were made that led to Jack being taken in by our partner rescue vet in W. Va., and where he remains nearly 2 weeks later.  As much as it clearly pained him, Jack let staff clean his mangled ear, which the vet described as an injury from an attack of some magnitude .  It should be noted that he NEVER nipped or bit staff as his wounds were tended to, in spite of his obvious pain.  He whined when it was too much.Jack, who is currently intact, was tested with a large female Pit.  He was interested in her and being social but she just couldn’t be bothered.  He was also tested with an adult male, neutered Pit and again interested in being social but a bit more reserved.  Although he sensed the other dog’s stress, he didn’t push the issue. No signs of aggression from Jack.  Considering he was dropped off with a cat, it may be assumed he’s good with cats but further testing may be needed.The Vet staff has described him as a wiggle butt and quite the talker, who will match you word for word .  He’s very friendly with the humans he’s met.  He loves treats, has those beautiful, inquisitive boxer eyes. He has fair leash manners and is very strong. He will pull and it will  take strength to walk this boy so that should be a consideration before applying to adopt him.Poor Jack didn’t like being confined. It’s believed he was a house dog, not a stray who lived on the street.  It’s quite possible that Jack and the cat belonged to the woman but perhaps she just couldn’t handle their bills.  Times are tough, we try not to judge.Jack will continue his medical treatment for his ear and will be neutered, most likely some time this coming week.We are looking for a safe place for Jack to land when he gets here from W. Va.  If you are interested in foster, foster-to-adopt or adopting Jack, please complete an application. If you are already approved, please let us know if you are interested.  We don’t have a specific date yet for Jack’s arrival .Consider giving this boy the love and caring he deserves.
Lovie
Poor Lovie’s owner passed away and she needs a family.  She is a six-year-old typical boxer!  She loves children and is good with other dogs, nonreactive to cats.  Located in Northern New Jersey.
Melvin
5-month-old boxer mix.  Northern New Jersey.
Melanie
5-month-old boxer mix.  Northern New Jersey.
Diva
5-month-old boxer mix.  Northern New Jersey.
Powder
Meet Baby Powder

she is the sweetest! She loves her person, loves to play, likes other dogs, and will follow you around everywhere!!! Totally house trained and sweet as pie! She is not great with cats. She is fully vetted, healthy and waiting for a home!
Apply at www.chelseashopeboxerrescue.com
Please message me with any questions!
Bama
BAMA. Olde English Bulldog. 5-years-old. Bama is still looking for her forever home. Loves kids, has lived with another dog. Housebroken, crate-trained. Walks well on a leash. Loves food, treats, and toys. She likes action but equally likes to chill. Doesn’t bark much but when she does it’s usually because she is protecting her house. Bama will need three medications indefinitely. Two are for dry eye (a drop and an ointment) and one is for her thyroid (a pill). She’s got the cutest underbite and loves snuggles and giving kisses! And she has the best wiggle!!!! Available through Chelsea’s Hope Boxer Rescue.
Max
Meet Max… This young boy just 18 months old is ready for his forever home! Max is looking for a home as an only dog. He loves riding in the car. He enjoys being outside and seems to enjoy flying solo. Max is high energy and although thinks he playing can be overbearing to other dogs. Older kids would be fine. Max is crate trained and would love a yard as he loves to play outside. Max’s ideal home is one that loves and understands adolescent boxers and has experience with the breed! Ready for Max? Max is being fostered in NJ!
Message me for more info and apply online
www.chelseashopeboxerrescue.com
Bluto
Bluto is a happy go lucky boy! He gets along well with other dogs at the vet clinic and loves to play!Bluto is enthusiastic so some dogs may need to be tested for their compatibility to him. He is very eager to make friends though! Fully vetted ready to go !We suspect that He was shot in the eye, causing significant injury. A Good Samaritan  took him to the vet where they decided to try to save his eye. After weeks of antibiotics it was determined that the best course of action in order to save his life was to enucleate his eye. He is a very sweet dog. A fenced in yard would be perfect for him so that he can play and run and be the big goofball that he is. He has  leash manners but is a strong dog . Bluto is a Velcro dog so if your looking for a great companion or family dog this is the fella for you! We suspect Bluetooth is somewhere between 2 -3 years of age.After all that he has endured Bluetooth still loves his humans and has so much love to give!
Derby
Hi everyone a little update on baby Derby like everyone has been told that he was born with spina bifida he will need to wear diapers all the time, he is doing fabulous on his prescription food and learning from my other dogs who also have spina bifida, he will be up for adoption soon!
Isn’t he just so precious 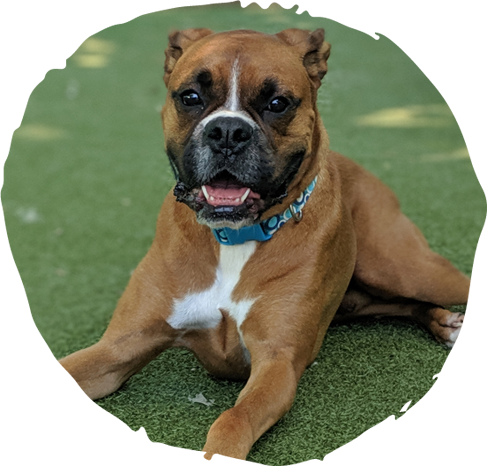 Help us save more pups!

We have racked up medical expenses getting all of our pups fixed up & ready to go to their forever homes. Anything you can spare is greatly appreciated & will go to the care of the dogs.